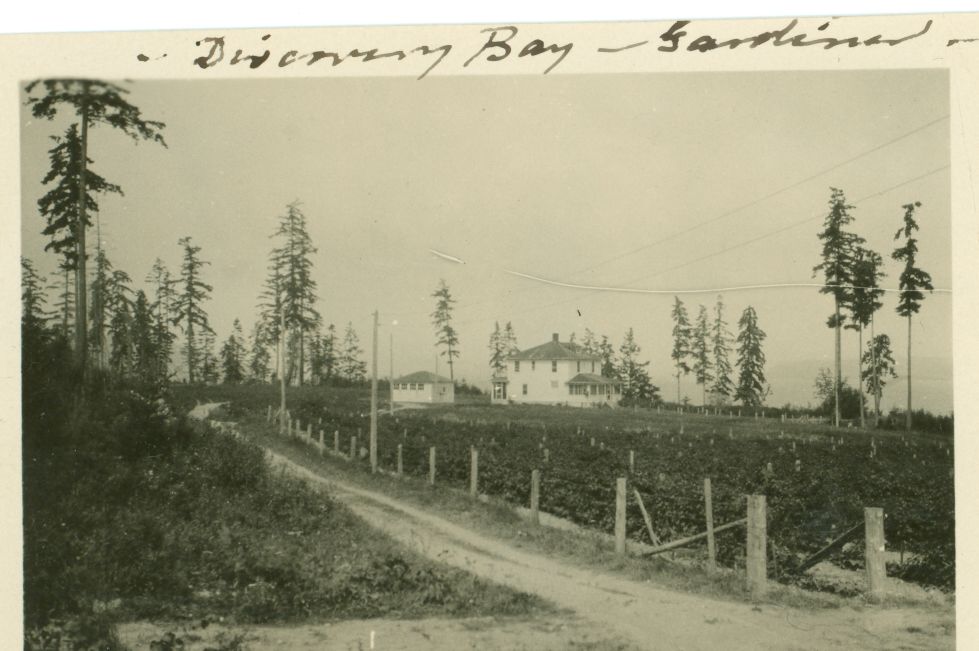 Gardiner is located eighteen miles from Port Townsend and five miles from the head of Discovery Bay on which it is located, the events affecting these areas and those of the Olympic Peninsula have affected Gardiner’s development.

The great sea powers of England and Spain competing with each other to find the Northwest Passage, but instead of that to find the commercial value of trading in furs, began the great saga of tremendous commercial success followed by depletion of the resources.  The Bay on which Gardiner is located and the 2,080 foot high mountain that rises to the south, were named after Captain George Vancouver’s ships – the Discovery and his longboat the Chatham.  Although it is the name Chatham that appears on maps, Indian legacy gave the mountain the name of Cry Baby.

Captain Vancouver’s ships were outfitted with new Spars while in Discovery Bay.  There is record of one ship sailing from England to obtain a full load of Spars for a ship builder during that period.  However, it would be a half century later before an industry from timber would be established.
From 1700’s to the 1800’s, the area went from a primitive land with immense forests to its shores, to an international shipping area.  During this period the end of the fur trading came as well as the end of the culture and of the tribes of Indians that lived on the Peninsula.

The first mill on Discovery Bay was started in 1858.  Mills were successful as long as they had accessible land and timber.  At one time, over one hundred sailing vessels were in the Bay loading millions of board feet of lumber.  At successive periods, oxen, horses, trucks, and the railroad all made more timber available for logging.  Each of these phases of development would ring in more settlers.  Some of the first settlers were men who after long difficult journeys from northern Europe and the East Coast of the United States, could not resist the quiet serene beauty of the area and would jump ship.

The land was obtained by Homesteading.  Other settlers came with families from San Francisco after traveling from different parts of the States.  Many workers in the Discovery Bay mills lived in Blyn and walked to work.  Deer trails became foot paths.  These developed into eight foot wide horse trails, and finally into roads.  Row boats and sloops were used to go to Port Townsend and Port Angeles.

Discovery Bay with its coves and inlets, sheltered many revenue cutters, and with its ravines and heavy forests gave protection to the Chinese and Opium smugglers.  The Chinese were brought to work in the mills.

Port Townsend became the center for shipping.  The Settlers were under the delusion that it would become a great coastal Port dominating the Puget Sound area.  With the development of steam tugs and sailing vessels with auxiliary steam engines, Port Townsend and Discovery Bay lost trade to Puget Sound cities where the ships could now be maneuvered.  A great speculation on land and future development caused by the expectation that Port Townsend was to be the terminus of a railroad ended in much economic loss to the area when the railroad went into Tacoma and Seattle.

The Federal government established the Custom House; first in Port Townsend and then in Port Angeles in 1850.  Forts were established starting in 1856:  the first Forts to protect against marauding Indians and later they were established as part of a national defense system around Admiralty Inlet.  In 1893, a Quarantine Station was built on Diamond Point.

Just as the earth was never been static, a fact evident were past glacial erosion causes the rivers and streams from the Olympics to discharge silt and sand – at one time the entrance of the lagoon into the Bay was wide enough to need a small bridge – so the use of the land has never been static.

In 1906, Herbert Gardner of Minneapolis accompanied by his wife and several followers settled in the area.  After logging the 2,500 acres they acquired, he raised apples, pears, and loganberries.  In the Boat ramp area there was a dock for the steamboats that had routes from Olympia to Victoria.  Near there he built a warehouse.  Loggers who worked for Gardner named the settlement after him, but the Post Office asked that it be spelled “Gardiner” as there was another town called “Gardner” in the state.

In 1986, in Gardiner, there were family names of Movius, King, O’Dell, Major, Nebel, Gatchet, Norton, Casselery, Gunstone, and Mrs. Charles Gunstone Sr. bringing the Johnson name.  Some of these families are into their fourth generation in Gardiner and go back more than half-century.